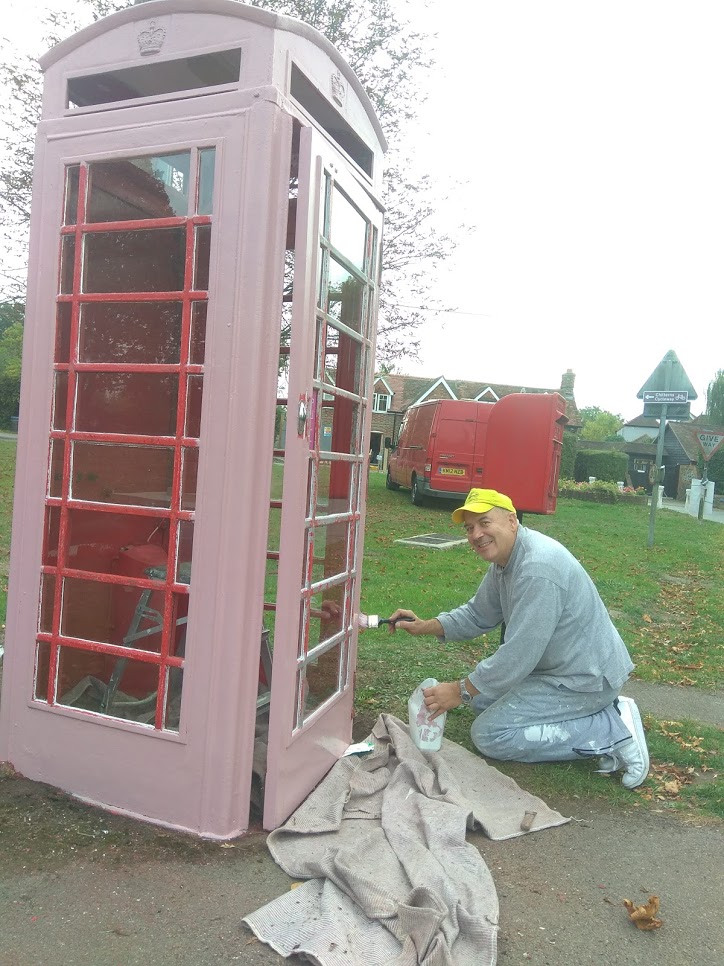 Dunsden’s phone kiosk is a model called the K6 which was designed by Giles Gilbert Scott for the General Post Office. It was known as the Jubilee kiosk as it was first made in 1936 to commemorate the silver jubilee of King George V. The K6 kiosk is made from cast iron with a teak door. It is 8’3″ tall (2.4 metres), 3′ wide (0.92 metres) and weighs three quarters of a ton (762 kilograms).

The parish council has bought it from BT for £1 with the aim of converting it to an information point, both for community news and for visitors to the area.

In 1953 Queen Elizabeth II decided to replace then current Tudor Crown with a version of St Edward’s Crown, the actual crown used for coronations, and this new symbol therefore began to appear on K6 kiosks. Protests in Scotland over the use of a British insignia caused the GPO to issue a revised design in 1955, and this is the version on Dunsden Green. It has a slot which allowed either the Scottish Crown or St Edward’s Crown to be inserted.

A more precise date has so far been impossible. Some kiosks bear a foundry mark and date, but this does not seem to be the case for the Dunsden kiosk. Since the 1990s BT has been painting the royal crown on its phone boxes gold, in recognition of their heritage value.

The only other phone box in the parish is in Playhatch. Because it is next to Playhatch House, which is Grade II listed, the kiosk at Playhatch is also listed, and continues to be maintained by British Telecom.

Some historical background about phone kiosks in the UK

With thanks to Hampstead Norreys History & Heritage

In 1912 the General Post Office (GPO) took over an ever-expanding telephone network and decided telephone boxes should have a uniform appearance. Some nine years later the Kiosk Number One – or the K1 – was introduced.

In 1923, the GPO held a competition to design a new kiosk and designs from many companies and architects were entered. It was not until 1926, however, that their chosen design first appeared – Giles Gilbert Scott’s K2. Unfortunately this model proved too big and very expensive for mass production. The GPO was still keen to have a new design and once again commissioned Sir Giles to produce another design. In 1929 the K3 appeared, a smaller, concrete version of the K2 and this time the kiosk was an immediate success, with 12,000 appearing countrywide.

The K4, nicknamed the Vermillion Giant, was intended to be a 24-hour post office, with a stamp machine and letter box added to the back. It too proved to be a dismal failure, with only 50 being produced and was soon withdrawn.

In 1934, a K5 was produced, made of plywood as a temporary kiosk for use at exhibitions and fairs etc. It was only in the 1990s that the designs of this box were rediscovered and it is not known if any originals still survive.

There were many K3s still in use but problems were beginning to occur with them, and the GPO considered that a new cast iron box was needed. Giles Gilbert Scott was again asked for a design.

In 1936 the K6 appeared for the first time on the streets. The kiosk was perfect, with all the good points of the K1 and K3 together with the solidity of the K2 and most importantly, the small size and elegance that the GPO were looking for. The K6 was widely used and by the end of production, there were nearly 70,000 in Britain. Many areas didn’t first approve of the red paint and so were allowed to paint them in alternative colour schemes.  Subsequently the iconic ‘post office red’ became ubiquitous.

The K7 – planned in 1959 – was designed by Neville Condor. It was an innovative design in its use of materials and six prototypes were produced in aluminum. It was eventually first produced in 1962; however the British climate caused discolouration and staining of the aluminum so the design didn’t prove successful and very few were introduced on to the streets of Britain.

The K8 was introduced by the Post Office in July 1968. Two designers, Douglas Scott and Bruce Martin, having been commissioned in 1965. The chosen design had to incorporate the best features of previous designs and be suitable for both urban and rural surroundings.

Bruce Martin’s design was eventually selected and when introduced had been produced in just over one year, the shortest time then taken to create a new kiosk. It was made from cast iron and contained full length toughened glass, and became the successor to Kiosk No. 6 (the K6).